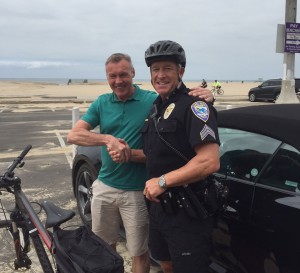 Having picked up my ‘stallion’ a Ford Mustang convertible that I nicknamed ‘Sally’ I set off on the fabulously scenic and incredibly ‘bendy’ Pacific Coast Highway. The car was a bit of an unaccustomed ‘spoil’ but it was worth dipping into my savings for this little bit of luxury and it growled pleasingly as I hit the highway. I stopped off in Monterey to watch dolphins, sea lions and humpback whales. The whales were waving friendly flippers in the air before smacking the surface of the water with great gusto! I waved goodbye and continued south to Malibu where I rested before reaching Santa Monica. It was there that a ‘brother’ from the Santa Monica Police Department came and said ‘nice car’ which took me by surprise, then I remembered I had a Mustang!

Sergeant Mike Graham was on bike patrol and offered me some security advice as there had been some recent thefts from vehicles. I thanked him and asked him for a photo with him, his bike and my car which a passerby kindly took for us. After a brief chat I explored the pier then set off for Los Angeles where umpteen lanes of heavy traffic jostled in some manic race to their individual destinations. Mine was the airport and soon I was in Albuquerque New Mexico where I met Lyndsey Stanek from Paws and Stripes.

I received a warm welcome from the team there who are trailblazing by using rescue dogs as service dogs for veterans with PTSD. After quizzing her for hours, the following day I met her husband and co-founder Jim who is a military veteran.  Jim was injured serving his country and the difficulty and expense of getting a service dog led them to take the matter into their own hands. Five years later over 90 families have benefitted from their rescue dogs.  I was privileged to witness an incredibly special moment where a veteran with PTSD was introduced to three dogs (all service dog material).  The expert training team and key staff were on hand  to help, but as if pre-ordained, the veteran and a large Doberman cross, with a kink in it’s tail, chose each other!

They now have a tough but rewarding training regime ahead of them, fully supported by and assisted by organisation’s team of staff and management.  They begin their training the very next day.  Both looked like they couldn’t wait to get started!  Thank you Paws and Stripes – you ARE making the difference! 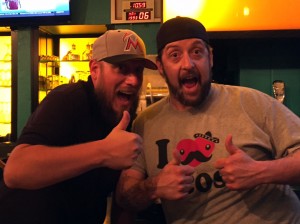 Inspired and feeling that our concept has a real chance to change lives for the better in the UK I continued my journey.
In a far cheaper and much more ‘me’ standard car I set of for Dallas stopping off in Amarillo for the night. I walked into the nearest bar ‘Joe Taco” to get a beer and what I found there was astonishing! It began with a chat about football, or soccer as the Americans call it, as they twigged from my ‘accent’ that I was not from the local area. We then went onto my favourite subject, dogs! Well this of course meant a great deal of photo sharing and story telling (who hasn’t got a shaggy dog story!)

I told my story about researching service dogs to make a difference back home in the UK. Neil the Manager and Tim his intrepid ‘sidekick’ were impressed! These wonderful people who knew nothing about me opened their hearts and treated me like a brother.  Before you knew it they were on their phones organising a fundraiser and getting really excited about helping veterans and emergency services people from the UK.  To say I was astounded is an understatement! The love of dogs and the understanding of what they can mean to those in need knows no boundaries.  I didn’t buy a beer all evening and decided to kick off the fund raiser by donating the money I should of spent to get things started. These wonderful folk are now firm friends and followers on Facebook and long may our happy relationship continue!

I am humbled and awed by the friendship, passion and goodwill that my mission is receiving here in the US and will never, ever, doubt the power of pawsitivity both for the recipients of service dogs and for those supporters who just ‘get it’ and believe that a dog can save or improve a life!

You have successfully subscribed to the newsletter

There was an error while trying to send your request. Please try again.