The Start of a Journey

Winston Churchill spoke eloquently about life’s journey. It is fitting then, as the Winston Churchill Memorial Trust has made this journey possible for me, that I mention this now, as I start mine flying over the Rocky Mountains. Yes, I’m on a mission, the emails that we receive every day at Service Dogs UK underline how important that mission is, but like Winston I am relishing the challenge and the journey. While the scale of what we are trying to achieve may be daunting I know it is achievable and that it will make a difference to those veterans with
PTSD. 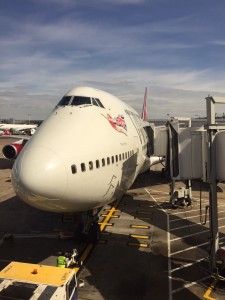 I ‘clocked’ some British Army guys and girls at the airport and got a chance to meet them on the plane.They were on their way to the Pacific coast to do some surfing. They were enjoying the complimentary drinks and being sociable and friendly to all the other passengers.Steve was on his prosthetic legs and Ben was his ultra tall ‘Buddy’ who had a knack for sourcing additional drinks in between trolley rounds. I happened to walk past as they were having a ‘dog off’ which entailed proudly showing each other pictures of their dogs!

I couldn’t resist joining in and I made a point of thanking them for their ‘service’. They were characteristically modest and waved it aside but I got the feeling they appreciated it and I felt better for voicing my gratitude. A little while later I sent a drink over to them and an hour before we landed they came over to share it with me and say ‘thanks’. As if they should thank me! So my journey began with a great encounter, meeting a terrific bunch of young people that any parent would be immensely proud of. It all started with a remark about dogs!

Steve, if you read this blog when you get back … say hello! In the meantime have a great time surfing! Well, the journey has just begun, and I’m looking forward to meeting more inspirational people like Steve, Ben and their mates and we haven’t even touched down yet. How funny and strangely apt that ‘our love of our dogs (even though not present) enabled us to start our conversation! I don’t necessarily believe in ‘omens’ but if I did … this would be a good one!