What a difference a dog makes!

During the last two weeks I have been completing the the ‘client’ course at Bergin University of Canine Studies.  While learning how to work with an assistance dog I met Chris who is a veteran with Post Traumatic Stress Disorder.  He is an active US Coast Guard who was diagnosed with PTSD in 2005.  Chris is an instantly likeable person who has a lovely wife and daughter but was very subdued and quiet at the start of the course.  Starting the course at all may never have been a possibility, but he spent time at Bergin University on the ‘Dogs Helping Veterans’ programme where veterans come in and help train the dogs on a part time basis. From this he learned the basic skills and found that working with dogs worked for him.

It was still a big undertaking for him to commence the ‘Client’ course with new people and new trainers and I know he was apprehensive about doing so.  It was certainly apparent at the beginning, but the influence of these clever canines over a two week period can be immense!  In order to get them to work for you it is vital you create a bond.  To create that bond of trust, love and respect you need to give that in huge quantities to to your dog, coaching him or her and recognising when it’s time to stop, have a break and some fun then go again.  You need patience and persistence, you need to recognise that if something doesn’t work, you, as trainer, are doing it wrong!  It makes you think about what you are doing, it requires all your focus, it demands all your effort and it is sometimes mentally exhausting.  But when you get that dog to do the task and carry out that command, you both celebrate it’s success, it is the best feeling! 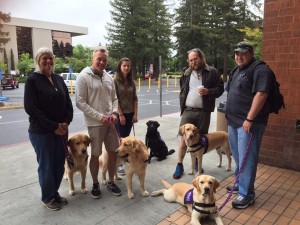 Chris was definitely not in his comfort zone at first and he reported that being around a lot of people was difficult for him.  He said that the course ‘forced him to be more active’.  What made him feel good was King, his assigned dog, doing things for him and working well.  He describes the course as being a very positive experience that surpassed his expectations. Chris became ever more social during the course, a dog is a great and easy way to open a conversation.  They act as a social ‘lubricant’ without the focus being on the handler, ideal for allowing someone to gradually become more sociable and re engage with society without feeling under intense scrutiny. It obviously works as he has already recommended the course to others and he will be taking King home as his Service Dog this weekend after successfully passing all the tests!

It has been a huge privilege to see first hand, the effect of this training delivered by passionate, motivated and positive trainers.  I was unable to be at the ceremony but a new chapter is beginning for Chris and his family and a very large part of the story will involve a dog and the difference that it makes, a very special, highly trained dog called King!