Whilst deployed on operations in the Middle East, Royal Air Force personnel have raised important funds, via Just Giving and by gathering personal donations donated by service personnel for Service Dogs UK by participating in a 24 hour Spin-a-Thon. 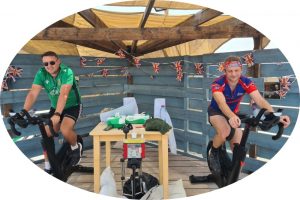 The supply section sergeant came up with the idea to promote fitness and wellbeing by supporting a charity of her choice at Al Udeid Air Base and she brought together a small team to organise the event which included the Group Warrant Officer, Warrant Officer Andrews, Warrant Officer Bowens and the Group Padre, Sqn Ldr (Rev) Colley.  The motivation for the event was to raise awareness for Service Dogs UK and provide a challenging event to inspire others to support those in need. 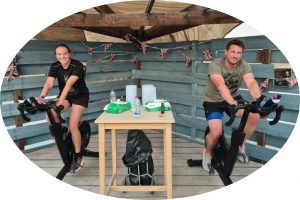 The organising team set up 2 bikes and coordinated a rota for UK personnel to donate $2 for a 30 minute ‘spin’ session. The challenge was to make sure the bikes were constantly being cycled on throughout the whole 24 hour period; the team of 4 organisers were standing by to cover any sessions, but the support from the deployed personnel meant that even in the small hours of the night, volunteers came forward to cover those 30 minute sessions. Music was being played and snacks and water were being provided by the organisers, as some volunteers completed numerous sessions in one go.

A raffle was also held which contributed to a total of $1,511 being raised from the event. The Just Giving page is still active if you wish to donate.

“Fundraising for the charity Service Dogs UK has been challenging and fun. The idea was to bring awareness to individuals suffering from PTSD and the benefits and improvements that a Service Dog can add to their quality of life. This event has brought the three core elements (83 EAG, 901 EAW and JFCIS) together as well as raising money for a worthwhile cause.” 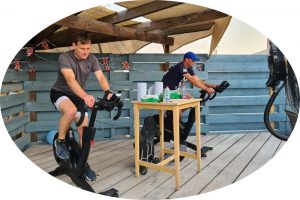 Donations collected for the charity will be distributed to meet the key themes and support Service Personnel and Veterans that are suffering with PTSD by providing them with a Service Dog.

UK Armed Forces are deployed to the Middle East to support counter Daesh operations as part of the 83-member strong Global Coalition. Participating in activities to raise money for charity is a great opportunity for our personnel to have some fun whilst supporting a worthwhile cause. It also provides respite from delivering air operations, which has recently seen the Royal Air Force play a significant role in supporting an Iraqi led ground operation to eliminate Daesh terrorists. The series of air strikes included the first operational use of Storm Shadow by a UK Typhoon aircraft.

You have successfully subscribed to the newsletter

There was an error while trying to send your request. Please try again.